The Maiden & The Wolves

Three brothers are walking in a field,


When they see a maiden surrounded by wolves.


The eldest brother charges in to rescue her with his bare hands, and the wolves tear him apart.


The middle brother sneaks in to rescue her with his silver blade, and he slices up one or two wolves before they find him and tear him apart.


The youngest brother decides to rescue her with his hunting rifle, and he shoots down the rest of the wolves before they can tear him apart.


When the shooting ends he glides over expecting a kiss, when she punches him in the face.

Say no if you want

Say thanks but no thanks

Say sorry but not sorry

Say what you need to say

This silence is rotting me out

A heart of stone

All this, and more,

Email ThisBlogThis!Share to TwitterShare to FacebookShare to Pinterest
Labels: Poems

White Dima and Scary Jackson sit on a black bed. While the snow piles on the night, they crowd around a tv, watching Moscow hockey. Dima knows he is sure to lose his bet, and fears it. Jackson knows too, and smiles. He might as well fish the money out of his pocket right now. He thinks of that blue cred card, ready to pay off his debts to the Finnish. Dima thinks of his children, and which one would be most appetizing to the Finnish: maybe that could buy him some time, and another gamble. Dima breathes in as the hockey puck glides across, inches from victory, seconds from defeat…

And when the aerial finally breaks, and the signal turns to snow, Jackson cries out, and Dima cheers to God.
Posted by Fniff at 10:55 AM No comments:

The Dead of Leningrad 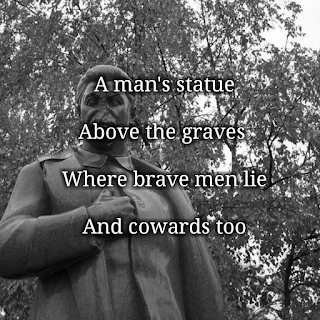 The man who sent them to their graves

How must they feel

The dead of Leningrad

And them, forgotten?
Posted by Fniff at 7:22 AM No comments:

He was a sorcerer from the blackest parts of Germany.

I sought him out, to study under him.

He said what he knew could not be taught,


He had a machine.

In the corner of his rented room at a disreputable inn, he had a machine the size of a shoebox. When I asked its purpose, he would smile and say it was for his enemies.


I grew impatient with him. He whispered secrets of the greatest caliber under his breath, but did not give me their context or meaning. Angels and demons would visit him in the night. He would treat one like a dear friend one night, and a total stranger the next. Sorting through his letters, I saw the names of kings and thieves, all asking his advice, all asking for an answer.

I was lost in a sea of cosmic intrigue.


When he was out on a walk, I took my chance and examined the machine. There was no lever or button, no cracks or gaps. But I heard ticking and grinding within, and it had a true weight to it.


I made no progress with it. So I watched him, and I poked him with questions about it. Not direct ones, you understand. I worked in implication and subtext, as it is the only way you can work with a sorcerer.


But one day, he figured me out. I moved too fast, asked too precisely. He said nothing, until I fell asleep.

When I woke, he had locked me into his machine.


I have known no pain greater than that place. Fields of burning grass, oceans of acid, freezing tundra, existence turned to suffering. T’was worse than Hell, for in Hell you hold out hope the devil will rise up and take back heaven.


I spent centuries in there. I learned the name of each ache and tear it gave me. I now know patience, and what fuels it.

Revenge. Hatred. To see your enemies choke out your name through a throat filled with blood.


Soon, I learnt how to unravel this place. Through the force of my hatred, I stripped the world bare. I annihilated the hostile lands, the horrid beasts, the pain and the humiliation.


I took away the worst of the machine.

And I was left with a paradise.

For the fields had grown up with poppies, the tundras had melted and become forests, and the oceans rolled calmly across the horizon.

A realization came across me.

I made this world.

I was its mother.


Then, he appeared before me.

Even as my hatred boiled, I was too shocked to say anything.


“This place is beautiful,” I said. “What trickery is this?”


“There are no tricks,” he said. “This is your greatest creation. A land without pain. And if you are like me… You will destroy it all.”


“It is what I did,” he said. “You learnt well. My former teacher locked me in this very machine. I did exactly as you did. When he appeared before me, I escaped and locked him in. It returned to a nightmare, and he died in agony.”


The sorcerer grinned at me.


“Now is the question. Is your love for this place stronger than your hatred for me?”


Considering I am speaking to you, the answer should be obvious.

That is the machine's final torture.
Posted by Fniff at 8:45 PM No comments:

Take the thumb taker. It's a huge box, a laser for oversized parts. You open it up, slot it in, and cut it down to template. Problem being, you hold the part in position with your thumbs. If the safety bar doesn't engage, the laser will remove them.

I cut a threaded lock, observing the shadow of the safety bar. Unlike Turnkey Tommy, I know to watch for it.

But if it does not kill me, some other story shall.

Someone sawed a girl's limbs off, then left her to die of exposure on a night just like this.

People didn't do anything about it, except close the factory and put everyone out of work.

Walking the vacant floor, my steelie boots clacking, I click the threaded lock into the gas tank of a fresh campervan.

Our village is hard to justify. The sea’s too cold for fish, and the dirt’s too frozen to farm.

Here. Make a car manufactory. That's a reason to remain.

But they ended it. Everyone has left. Not me. I guide the van down the belt toward the train cars. The vaulted ceilings echo the squeaking of the tires. No-one but me. Not Two Cup Karl, not Turnkey Tommy, not even Johnny the Rat.

Johnny the Rat was the caretaker, and he got his name by the bathroom wall. They wrote JOHNNY IS A RAT on the tiles in marker pen. You see, he saw the girl, he talked to the management, and it got him no job, same as anyone.

Who else will remember his name?

Just me, and the limbs scraping the ceiling.

The van stops at the belt's end. The door to the traincars a few feet away, snow blowing in out from there. I get the planks lying against the wall, make ramps onto the car.

With a pull of the lever, the vehicle rolls off the belt and rolls up the planks. I think, it won't make it. And for a moment, I pray I will be as Sisyphus: I shall forever push the van up the plank, and watch as it slides right back.

But it doesn’t. It goes into the train car.

Bitter, I slam the doors shut and signal the robot in the locomotive. The train hisses and pulls away.

The door slides shut behind me. I move through to the fuse box and start flicking off the lights. Each row goes dark across the floor.

The thrum of industry has left, with only the howling wind and her breath on my neck as company.

She lays three razorfingers on my throat. It's a professional job. A fine replacement.

I did not saw her legs and arms off, I did not pretend she was already dead when they finished, I did not stay silent during the police investigation.

I watched, and I remembered.

The Industrial Maiden slices my neck open, and all the memories spill out.
Posted by Fniff at 8:24 AM No comments: 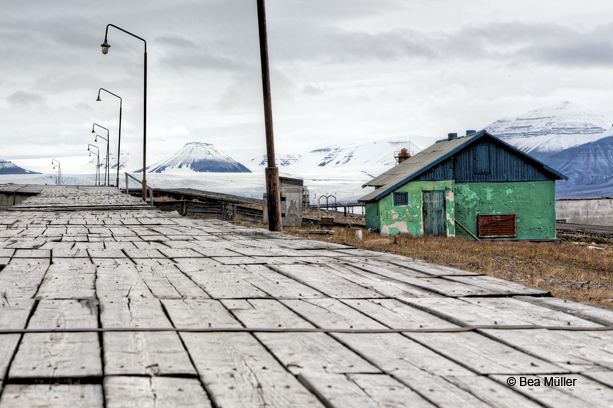 Source
When I write stories, sometimes I like to imagine them taking place in the same place. Some dark corner of the world that people forgot for various reasons, and where strange things grow. Like mushrooms, in the dark and damp.

Snow Rapt is one of those.

All these stories take place in the same post-soviet arctic village (similar to Pyramida or Dikson), sometime in the near future. Things are not going well. In a land where night can last for months, and stepping outside without proper protection can kill you, living is difficult enough. When industry and purpose departed, the town began a slow but steady decay. The people who have not moved out to brighter pastures stay, relying on their addictions to fentanyl or moonshine for comfort in an uncaring and cold world.

Light a fire, my friends, and warm up while it burns. Strange things happen out in the dark, while the blizzards blow.

If you like listening to music while reading, here's a Spotify playlist of songs that inspire this setting. 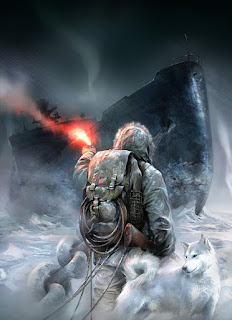